Among the tangible remains of classical antiquity that first attracted the interest of early humanists, collectors, archaeologists, and antiquarians were Roman coins. These were readily accessible and numerous, and coins existed as ‘multiples’, often with very many identical examples of each coin type. Thus ancient coins figure large in the early stages of the history of classical archaeology. 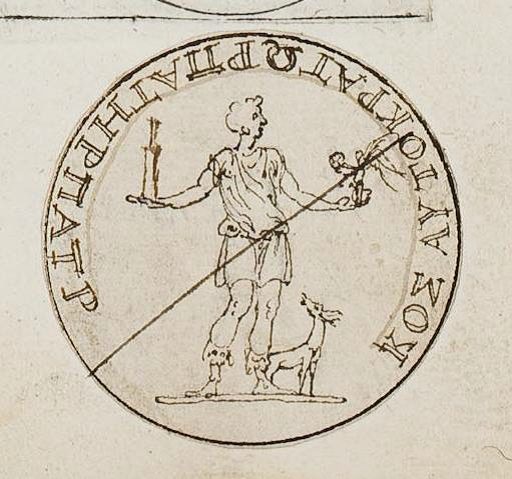 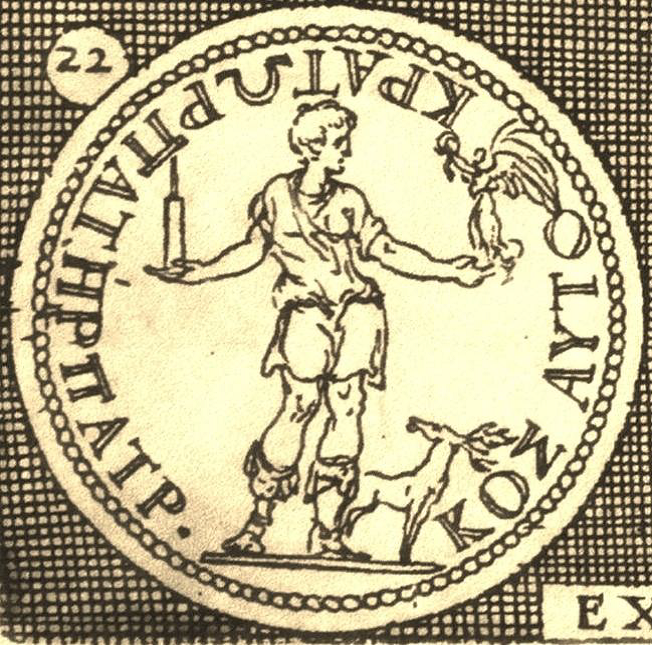 PETRARCA (1304-1374) is often counted as the first ‘modern’ coin collector. For Petrarca, his coins constituted a portrait gallery of Roman emperors, bringing alive before his eyes the lost glory of ancient Rome. He also used coins as historical evidence. Thus he valued the dual character of coins, on the one hand, as sources for ancient portrait iconography and, on the other hand, as evidence for writing history – to illuminate, for example, the texts of ancient writers, to establish historical chronology and to provide testimonies for economic and cultural history. Two centuries later, all these motives still play a large part in the numismatic works of Enea Vico (1523 -1567), who is the central figure in FONTES 79 and FONTES 80. Vico sought, in particular, to understand the emperor portraits on the coin obverses and to relate them and the imagery of the coin reverses to the emperors’s Vite by referring to ancient texts and extant antique works of art and artefacts.

Archaeology is concerned specifically with mankind and his material culture, such as buildings, tools, and works of art. The humanist revival of ancient learning in the fifteenth and sixteenth centuries led to an increased interest in Greek and Roman antiquities and to a widespread enthusiasm for collecting ancient artefacts. From the mid-sixteenth century onwards this early phase of collecting antiquities took a more scholarly turn, with increasing attempts to register and record comprehensively the surviving monuments and other material remains of antiquity, often including a visual documentation of objects.

The book, Le imagini con tutti i riversi trovati et le vite de gli imperatori tratte dalle medaglie et dalle historie de gli antichi, Libro primo (ed pr. 1548), by Enea Vico and Antonio Zantani, belongs to this tendency. The signficance of this seemingly unassuming work is revealed here for the first time. In earlier literature the book is usually passed over with a mere mention, or accorded no more than a cursory external description. In reality, it embodies and reflects many of the main themes and tasks of an newly emerging science of archaeology: among them, collecting, travel and discovery; the registration and documentation of monuments and artefacts, including a visual documentation and analysis; the expansion of the universe of monuments and the increase in knowledge about them; the cataloguing of monuments and artefacts in, e.g., corpora of monuments (Census); the ordering of the material according to systematic criteria; the determination of the historical identify of the monuments and the interpretation of monuments and artefacts, etc.

FONTES 79:   Antonio Zantani and Enea Vico’s „Libro primo“ of the Imagini con tutti i riversi trovati et le vite de gli imperatori tratte dalle medaglie et dalle historie de gli antichi of 1548 contains portrait images of the first twelve Roman emperors and images of all the reverses of their coins then known, as well as the vite (biographical sketches) of these emperors based on ancient written texts. Thus it is a book of Roman emperors (Kaiserbuch), one which joined Bildnisviten (brief ‘Lives’ with portraits of the emperors) to a systematic numismatic corpus illustrating all the coin reverses of the canonical twelve Caesars. Antonio Zantani was responsible for the textual components in the Imagini.  These comprise (1) the two prefaces addressed to the readers of the book, (2) the abbreviated, almost epitaphic descriptions of each emperor on a sort of fictive tablet beneath the numismatic images of the emperors, and (3) the brief narrative biographies that complete the treatment of each of the twelve emperors. While FONTES 79 concentrates on Zantani’s contribution to the Imagini, Vico’s part in the book was no less important. Indeed, his contribution focuses on the primary theme of the book, the reverses of Roman imperial coinage, a topic scarcely treated in the text passages. Vico’s contribution consists in his design and execution of the plates for the elegant frontispiece-like illustrations that presented the twelve emperors’s coin portraits and in his graphic recording of the approximately 550 coin reverses presented in the illustrations. Owing to Vico’s corpus of imperial coin reverses in 54 pages of engravings, the Imagini represents a milestone in numismatic publication, constituting a virtual coin cabinet. Vico’s close observation and study of the coin reverses in the course of preparing the „Libro primo“ was fundamental to his subsequent organization of the never published „Libro secondo“ of the Imagini, as well as fundamental to his later expository numismatic treatise, the Discorsi sopra le medaglie de gli antichi, published in 1555.

Zantani’s biographies of the emperors, in a tradition of Bildnisvitenbücher, are especially indebted to Andrea Fulvio’s Illustrium Imagines (1517). Zantani’s brief vite are organized along the lines of Suetonius’s biographies of the first twelve emperors. Much, but not all of what Zantani reports, is drawn from Suetonius – he also relies upon Tacitus and Cassius Dio, among other sources. Zantani’s vite treat each emperor’s origins, his family, his physical appearance, his character, his most notable deeds, selected events from his reign, his urbanistic undertakings, building activities, and restorations, his honours, and his death. While these biographies are not notable today for the historical information they contain, they are characteristic of their time and of the interest men then took in ancient coins. These are strongly moralising portraits in words, written to accompany the numismatic iconography of the emperors and their coin portraits. Zantani’s vite of the emperors show clearly the contradictions in the emperors’s characters, their tendencies both towards virtue and vice (including even their violent tendencies), and they show the punishment of vice and the reward of virtue, thereby adding weight to the moralizing theme of Zantani’s first preface to the reader. Unlike Andrea Fulvio’s, Antonio Zantani’s activities as a collector of ancient coins and as a student of the biographies of the emperors do not provide modern scholars with new source material concerning antiquitates in a broader sense. His texts, when read together with the images of Vico, do, never the less, offer an initial historical framework in which imperial coinage may be studied, and his vite, brief as they are, intend to stimulate – indeed Zantani challenges the reader to investigate Vico’s coin reverses further in written historical sources.

FONTES 8O:   Three Notable Later Editions of Antonio Zantani and Enea Vico’s Le imagini con tutti i riversi trovati et le vite de gli Imperatori tratte dalle medaglie et dalle historie de gli antichi [1548]  identifies and examines three later editions of this work from bibliographic and bibliophilic points of view. The first is a little known edition, in Italian, printed in 1552, which is universally neglected in the modern literature. This volume, in the Bayerische Staatsbibliothek, is presently not identifiable in the electronic catalogue of the library (OPAC) and is unknown in the modern bibliography of Vico’s works. The second edition is an enlarged Latin translation of the Imagini by Zantani and Vico, published in 1553, in a special redaction dedicated to Pope Julius III. The third edition is the complete edition of 1553, which was reprinted unchanged in 1554. This edition, without a dedication, contains two new indices by Vico. The first index treats the corrections, additions and changes to the first edition of 1548. The second index, a lengthy register of all the memorable things that are to be found in the book, refers the reader to the representations of these on the coin reverses.

(1)  Antonio Zantani and Enea Vico, Le imagini (...), [Venezia] 1552 (München, Staatsbibliothek, Res/4, Num. ant. 206k). In this issue the title page has been recomposed. There are numerous other differences in comparison to the first edition of 1548. Some of the brief ‘inscription-like’ vite have been recomposed and typographically re-set, and they include a few corrections. Occasionally the sequence of rectos and versos does not correspond in the two editions. There are also some changes in the brief narrative vite. A detailed account of the variations is given for each emperor. The purpose of this corrected re-issue of the first edition is not entirely clear, but it appears to be reflected in the Latin translation of 1553. What the example in the Bayerische Staatsbibliothek does, however, demonstrate, is that the Imagini of 1548 must have encountered sufficient interest among readers, for the authors and publisher to contemplate an Italian reissue of the book.

(2)  Antonio Zantani and Enea Vico, Omnium Caesarum verissimae imagines ex antiquis numismatis desumptae, [Venezia] 1553 (München, Staatsbibliothek: Res/4, Num. ant. 200). The Munich example of this work is a special redaction containing (unlike most examples of the book) a printed dedication to Pope Julius III. The existence of the version dedicated to Julius III has been noted in the bibliographic tradition for Vico and Zantani, but its nature, historical context, and specific characteristics have not been fully understood. Subsequent to 1548, Zantani received titles and benefices from Julius III (reigned 1550-1555). The prefaces to the 1553 Latin edition identify Zantani as “Comes, et Eques”, titles bestowed on him by Julius III. The Latin dedication to Julius is included here in a full text version, and a modern German translation by Gregor Maurach is provided. Vico’s dedicatory text constitutes a recognition of Zantani’s new titles and of his contribution to the Imagini of 1548, and it may well represent an attempt on Vico’s part to obtain the support of Pope Julius III for this publication as well as for other numismatic publications that he was contemplating.

(3)  Antonio Zantani and Enea Vico, Omnium Caesarum verissimae imagines ex antiquis numismatis desumptae, [Venezia] 1553, reprint 1554. The Latin edition of the Imagini (1553, 1554) contains very many coins not found in the Italian edition of 1548. As many as 95 were added, along with two new indices. The first index notes briefly the additions and corrections to the edition of 1548; the second index, entitled “Numismatum et rerum omnium memorabilium, quae in hoc libro sculptae visuntur Aeneae Vici Parmensis Index”, is an extensive alphabetical list – almost a catalogue – of the notable things (objects, persons, allegories and events) represented in Vico’s engravings of the coin reverses. These indices are omitted in the Munich dedicatory example, and they may be missing in other dedicatory examples. This circumstance perhaps suggests that dedicatory examples were printed first, before the Latin version was fully set in type, in order to offer an anticipatory printed example to the pope, with a dedication to him, before the book was issued to the public. It does not seem likely that the indices would have been considered superfluous for the papal court, and their omission suggests that they may not yet have been printed. The references to things represented on the coins of Claudius have been excerpted from the second index and are presented here in a full text version. The corresponding pages showing Vico’s numbered illustrations of the coins of Claudius are reproduced. The complete second index is reproduced in the Nachtrag / Addendum to FONTES 80.  It gives for the first time a fairly comprehensive registration of the universe of imagery of the coin reverses of the principal Roman emperors.